We Have Seen Pope Francis! 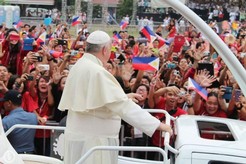 MANILA, Philippines- The visit of Pope Francis to the Philippines on January 15 to 19, 2015 has touched very deeply the lives of the Filipinos. His visit embarked with the mission of bringing the mercy and compassion of Christ to those who struggled to rise from the devastation brought about by natural calamities. It was truly a blessing for us to have witnessed the Pope’s visit, since not all can have the chance to go to Rome. Our prayers had been answered when we, the SMM Novices and temporary professed brothers found ourselves among the six to seven million people who attended the Papal Mass at the Quirino Grandstand, on January 18, 2015. We arrived at Luneta Park at around 6:30 AM and we could not move freely because of the huge crowd. We almost gave up the hope of reaching and standing near the big screen, but our eagerness to see the Pope prevailed. We managed to go with the flow of the people and, after three hours, we were able to reach one of the quadrants of Quirino Grandstand, not very far from the main stage. Actually, there was an area reserved for religious men and women, but we opted to stay with the people, in solidarity with them. We joined in their enthusiasm and joy at seeing the Pope. After some time, the program hosts invited all of us to pray the Rosary followed by the Angelus. While we were having our lunch, the rain started to pour down but it did not move the people away. They all stayed to attend the celebration of the Eucharist presided by the Pope. There were delegates from dioceses all over the Philippines including the archdiocese of Cebu which led us into the “Sinulog” dance and rhythm, in honor of Santo Niño (Child Jesus), whose feast occurred on the same day. When Pope Francis entered Rizal Park, riding on a “pope-mobile” especially made for the occasion and based on the design of the local jeep (called “jeepney”), the people gave him a triumphant welcome with loud cheers and with teary eyes: “Papa Francisco, mahal ng Pilipino!“ (Pope Francis, loved by the Filipinos). Many in the crowd raised the images of Santo Niño as the papal convoy passed by. We were really blessed for we managed to see the Pope just a meter away. At that moment it felt like being touched by Jesus himself. The Holy Mass started at 3:00 PM, participated by almost seven million people who felt deeply moved by the Spirit of God. Pope Francis began his Homily with these inspiring and touching words: "I have listened to you singing the song, We Are All God's Children. That is what Santo Niño tells us. He reminds us of our deepest identity: all of us are God's children, members of His family." Then, with a loud voice, he said: "Filipinos are called to be outstanding missionaries of our Christian faith in Asia." At the conclusion of the Eucharist candles were lighted and the assembly joined in the singing, Tell the World of His Love, as the Holy Father sent us, in the name of God, to bring mercy and compassion to our families and communities. Indeed, we are so blessed! We will never forget this grace-filled moment. In the years to come we will be proud to say: “We were novices when we saw Pope Francis for the first time.” Glory to God Alone!
-Bro. Armel R. Collantes, nSMM