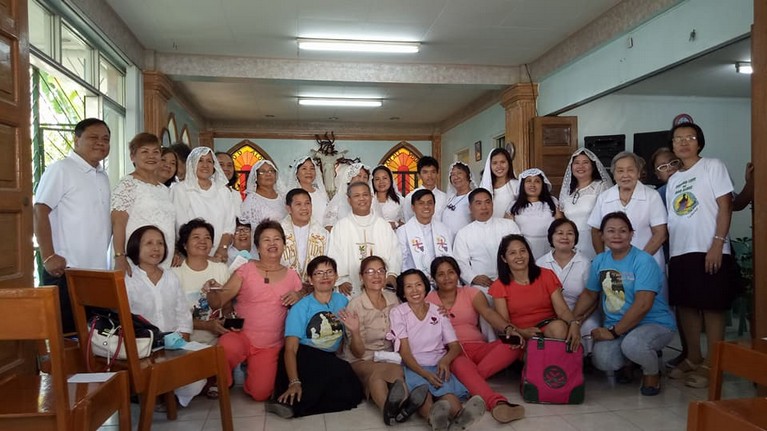 There were eleven participants who successfully completed the 33-days preparation for total consecration. They are the members that will comprise the Cebu TTJ Batch 15. The group gathered at the Montfort Mission House in Cebu for 33 Sundays and the first group who already used the revised manual. Prior to the Consecration Day, the candidates held a Recollection which was facilitated by Rev. Fr. Rene S. Bustillo, SMM. It was held at Schoenstatt Shrine on April 28, 2018.
The day of Consecration was held on April 29, 2018 at the Montfort Mission House. It was integrated within the Holy Eucharist which was presided by Rev. Fr. Richard J. Magararu, SMM, Delegation Superior and with concelebrants, Rev. Fr. Sherwin Y. Nunez, SMM, and Rev. Fr. Rene S. Bustillo, SMM. In his homily, Fr. Richard emphasized the real duties and responsibilities of a consecrated person and he motivated the 11 candidates to live out their consecration which they have just made. He reminded them that it is only the beginning and not the end of the journey.
The members of other TTJ Batches had also made their renewal of consecration. After the Mass, a simple program was held and a sumptuous lunch was shared by everyone. It was indeed a meaningful journey for all participants towards a committed Christian life as they live out the total consecration.
Glory to Jesus in Mary! Glory to God Alone!