Consecration to Jesus Through Mary in Kinatarcan Island , Cebu 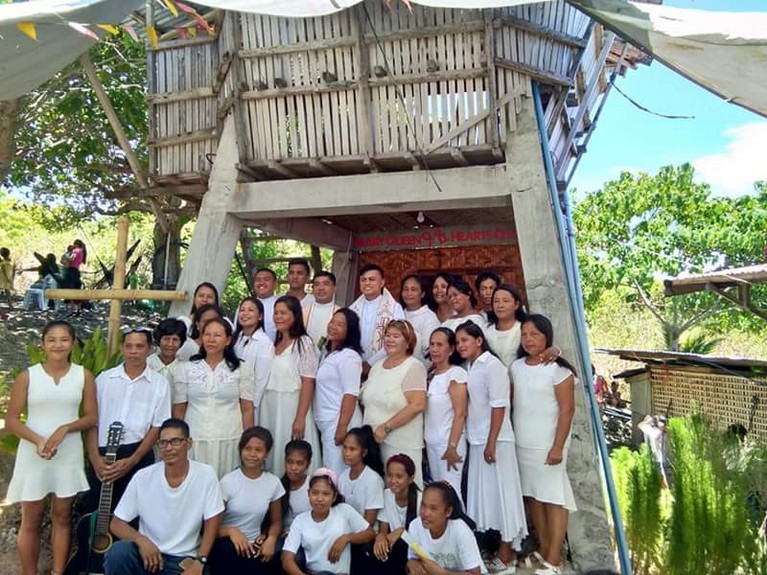 On May 24, 2018, the feast of Mary Help of Christians, 26 people in Kinatarcan island made their Consecration to Jesus through Mary according to St. Louis-Marie de Montfort. It was integrated within the Holy Eucharist which was presided by Rev. Fr. Richard J. Magararu, SMM, Delegation Superior. Some Montfortian priests, Fr. Rene Bustillo, Fr.Gener Pito and Fr. Sherwin Nuñez concelebrated with him. The celebration started at 9:00 o’clock in the morning. It was attended by SMM brothers, some members of the Association of Mary Queen of all Hearts, family of the candidates and the community.
It was an exciting and memorable event in the whole island for it was the first time that the Totus Tuus Journey (TTJ) was conducted in the island.  It was through the initiative of the Montfort Miisionaries who stayed in the island for the whole duration of the 33-day preparation. Fr. Rene, the team leader, was assisted by Fr. Gener and Bro Christopher Mejia (postulant), made the mission in the island possible. This served as a follow up of the mission which was started by the Montfort Missionaries led by Fr. Reynaldo Bullas Jr. ten years ago.
The journey was not that easy that among the one hundred people who attended the orientation, only twenty six finally made it. Participants who journeyed together really exerted extra efforts since many of them were occupied with house chores and other obligations. The life in the island is very tough because of limited resources and especially during summer time the heat is very intense.
One of the participants shared that she is always discouraged by her neighbors saying that she cannot gain something out of the activity. Yet it did not hinder her from committing herself to the Lord through the TTJ. She managed to go to the venue on foot despite of the long distance. Her only response was ignoring the people who discouraged her and she kept on attending the sessions until the end. She felt happy and fulfilled to be one among those who consecrated themselves to Jesus through Mary.