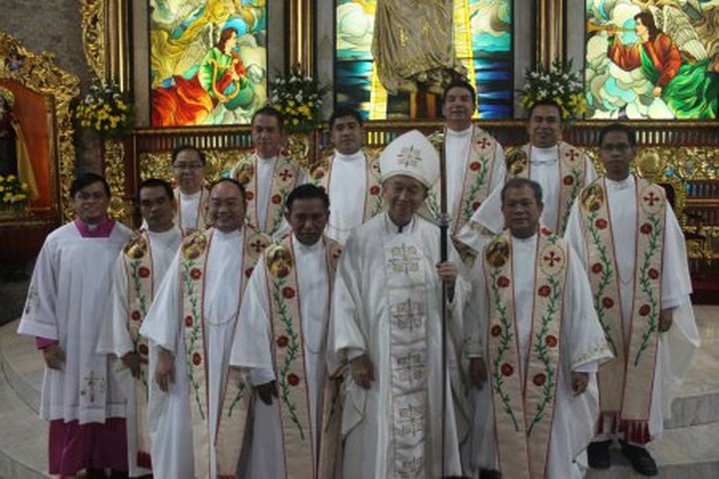 The Parish of St. Therese of the Child Jesus in Makati City which is under the Archdiocese of Manila celebrated its silver foundation anniversary last July 12, 2017. It was established on June 18, 1992 but the formal erection was July 12, 1992. Hence, every year this date is commemorated as the foundation anniversary. The administration of this parish was given to the Montfort Missionaries by the late Archbishop of Manila, Jaime Cardinal Sin. He was also the one who invited the Congregation to come to the Philippines. The first parish priest was Fr. Jose Luis Sandoval, a Colombian Montfort Missionary who was installed on the same day the parish was erected.
Novena masses were celebrated to prepare the parish community for the grand launching of the anniversary year. The Eucharistic celebrations were presided by the Montfortian priests who served the parish for the past twenty five years. Representatives from the different zones, organizations and ministries gave testimonies about the development of the parish during the Mass. On the last day of the Novena, statues of St. Therese of the Child Jesus were distributed to the zone leaders. During this anniversary year, these images will be brought from one house to another, visiting every family in their respective zones.
The highlight of the celebration was a Solemn Mass officiated by Bishop Broderick Pabillo, D.D., Auxiliary Bishop of Manila. In his homily, he emphasized the significance of celebrating a milestone in the life of the parish community. According to him what is being celebrated is the faithfulness of God. He also challenged the parishioners to still reach out to others who are baptized but are lost.
After the mass, a reception called “Barrio Fiesta” was held in the covered court of the place. It was decorated like that of a typical feast in the country side. During the program, traditional folk dances and songs were presented. Even the food that was served was typically Filipino. The parishioners, particularly the active members of different organizations were dressed in traditional Filipino attire. Everybody enjoyed the night. The raffle draw of 25 bags of rice, 25 flat irons, 25 kettles, and 25 electric fans, donated by the parishioners themselves added fun to the celebration. What a wonderful evening to start the year-long celebrations of being a community directed by the Montfort Missionaries.