Silver Lining: A Celebration of 25 Years in Priesthood of Fr. Ariel and Fr. Richard 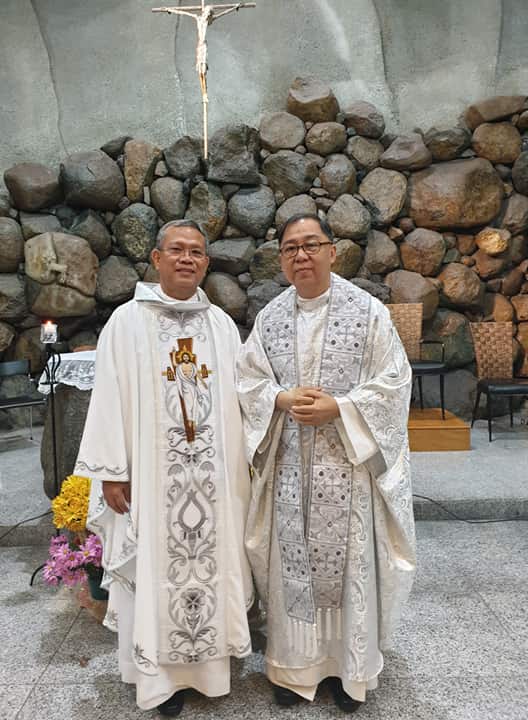 QUEZON City - Sacerdotal anniversaries are joyful occasions where the celebrators and their friends, family and the whole community sing praises to God for his faithfulness and his boundless blessings. It was fitting to start the 25th Silver Jubilee of Rev. Fr. Richard Magararu, SMM & Rev. Fr. Ariel Aquino, SMM on Saturday, 23 November 2019 with a thanksgiving Mass celebrated at St. Paul University Chapel at 8.30 am with Fr. Richard as the main celebrant. There were 11 concelebrants from the Company of Mary and Fr. Enos Bulu Bali, CSsR, a guest priest from the Congregation of the Most Holy Redeemer, Rev. Fr. Mario Belotti, SMM was the homilist as he is truly a significant person and source of inspiration to our celebrators, being their Novice Master during their formation. The chosen Gospel was about the vocation of Mary, since she has played a crucial role in the vocation story of Fr. Ariel & Fr. Richard, our first Filipino priests in the Company of Mary who were both ordained on 20 November 1994 at St. John the Baptist Parish, Pinaglabanan, San Juan City by the late Eminence Jaime Cardinal Sin, Archbishop of Manila.
Fr. Mario further reflected on the writings of our holy founder, St. Louis Marie de Montfort: “Blessed, a thousand-fold blessed, are those priests whom you, Lord God, have chosen with such care to dwell with you in Mary as to be formed by her”. These priests who dwell in Mary and let themselves be guided by her in their lives and ministry, in the course of time learn to embody the spirit of the BEATITUDES, that is they become Christ-like in their way of being and doing.
The celebration continued its way into the gymnasium hall of St Paul University where the second phase of the celebration was held. The masters of the ceremony were brother Oliver Abasolo, SMM (Novice, UK) and Fr. Benjie Notarte, SMM (Scholastic formator).  At 10:30 am more than 200 in-all the invited guests, families, benefactors and friends of the celebrators had gathered comfortably in the hall. The second part of the program was opened with a song prayer from the Santa Teresita Parish Choir led by Mark, the pianist, followed by the superior delegation Fr. Norwyn Baydo, SMM who delivered the opening remark and a warm welcome to all.
The celebration was highlighted with much greetings of best wishes and tributes by some of the confreres and friends of the jubilarians and some were not able to physically be present on that day but were spiritually in union with the celebration such as those who were in Rome, UK, Canada and Papua New Guinea. Reverend Father Luiz Augusto Stefani, SMM, The Superior General also gave his tribute message from Rome extending their warm blessings and prayers to the jubilarians. In the middle of the program, the guests were treated with a sumptuous meal while they enjoyed the rest of the presentations prepared for all of them. The Daughters of Wisdom presented a song and dance number while the Montfort Fathers and brothers serenaded the audience with a couple of songs. Other guests also performed their song numbers much to the delight of all the guests.
The two jubilarians were also given papal blessings as a special gift coming from the Delegation of the Philippines handed by Fr, Norwyn Baydo, SMM and Fr. Santiago Casing, SMM, made possible by Fr. Reynaldo Bullas, SMM. It was so special in a sense that the two silver jubilarians, Fr. Richard and Fr. Ariel were the pioneer Montfort local Filipino priests to celebrate their Twenty Fifth Sacerdotal Anniversaries.
The whole assembly prayed for the Silver jubilarians that they may be strengthened with grace, energy and wisdom to respond to new challenges in our time while always remaining faithful to the Gospel and the Church. May they continue to be priests of Christ formed by Mary, at the service of the Church and the people of God.  Ad Multos Annos!
Br. Oliver Abasolo, nSMM and Br. Michael Hilton Kava, nSMM.