Living out the consecration: Instruments of God’s healing presence 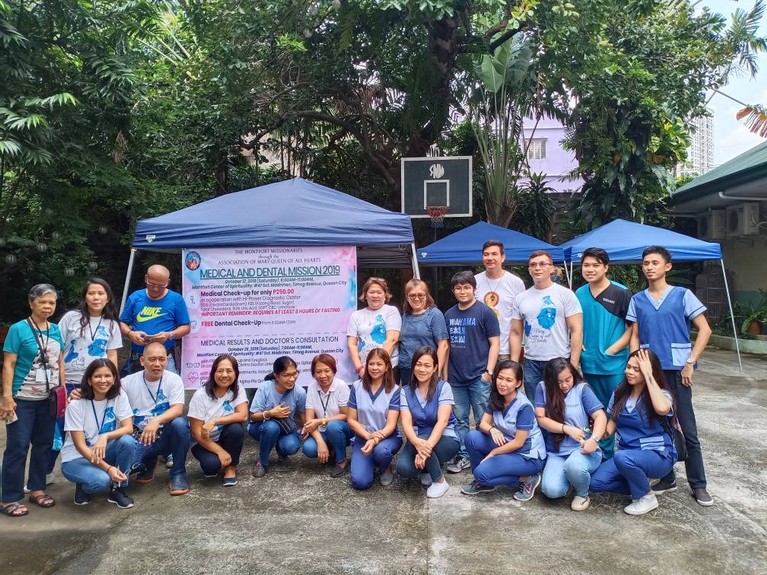 Quezon City, Philippines-The Epistle of James Chapter 2:14-18 says “What good is it, my brothers, if someone says he has faith but does not have works? Can that faith save him? If a brother or sister has nothing to wear and has no food for the day, and one of you says to them, "Go in peace, keep warm, and eat well," but you do not give them the necessities of the body, what good is it? So also faith of itself, if it does not have works, is dead.” Taking from these words of St. James we can say that in the missionary life of St. Louis-Marie de Montfort this is evident. This Apostolic Missionary is not only concern with the spiritual well-being of the people during his time but also of the necessities of the body. He begged food for the inmates of the Poor House of Poitier, he had his kitchen soup for people during mission especially for children during catechism, and it only shows his holistic understanding of the human person. And this way of doing mission is one mark of the Congregation he had founded and is trying its best to be faithful  in their mission activities with their continues collaboration with lay people.  With this inspiration, the Montfort Missionaries through the Association of Mary Queen of All Hearts (AMQAH-Philippines) had a two-day Medical and Dental Mission held at the Montfort Center of Spirituality at # 47 Scout Madriñan, South Triangle, Quezon City last October 12 and 26, 2019. Though this is not the first time for the SMM in the Philippines to do Medical and Dental Mission but it is the first for the AMQAH members to organize this activity from the very first step until the last. The first day was medical check in cooperation with Hi-Power Diagnostic Center which started at 6 o’clock in the morning. The seventy two (72) persons who availed the services had an 8 hours fasting as preparation for their laboratory examinations such as ECG (Electro Cardio Gram), FBS (Fasting Blood Sugar), Total Cholesterol, BUN (Blood Urea Nitrogen), Uric Acid, CBC (Complete Blood Count), SGPT (for liver diseases test) and Urinalysis. Alongside with the medical checkup, there was also a dental checkup and tooth extraction in cooperation with Dra. Carmencita Galvan and her son Dr. Marc Angelo Galvan for the twenty (20) persons who have dental concerns. Most of the people who availed of these services are from the urban poor community near the Montfort Center of Spirituality. After they finished the test, they were given food for breakfast. Some SMM priests, seminarians and staff also took the opportunity to avail of this medical and dental services. The beneficiaries were asked to come back on October 26, 2019 for the tests results. After the activity the medical staff, volunteers, AMQAH members celebrated the mass in thanksgiving for a meaningful first part of the Medical Mission. The celebration was presided by Fr. Arnel Pagaduan, SMM, the collegians and some scholastics joined the celebration.  October 26 was the second part of the Medical Mission. It started with the celebration of the Holy Eucharist at 6 o’clock in the morning presided by Fr. Federick B. Yumang, SMM-AMQAH National Director, then around 7 o’clock the free eye check-up begun for the ninety-six (96) persons who have eye concerns. The free eye check-up with free eye glasses was in cooperation with the Centro Escolar University Compass Optometry Chapter led by Dra. Carla Ocampo. There were also eighty persons (80) who availed the wellness treatment (Acupuncture, Ventosa, BMR and Chiropractic service) during that day, provided by Alpha Phi Omega Caravan led by Mr. Aldo Rosaria. There were about seventy-two (72) persons who availed of the free doctor’s consultation from 8:30 AM to 12 NN. The people were provided with snacks and some free medicines for diabetes and hypertensive patients. These two day activity was indeed a grace-filled experience not only to the people who benefitted from this activity but also to those who offered their free services. It was indeed a manifestation of God’s loving care to His people. He touched individuals and groups to respond to the invitation to share their time, expertise and material blessings for this activity. The working together of the super dedicated Associates of the Montfort Missionaries (AMQAH) are true inspiration and manifestation of “Jesus Living in Mary” aspect of the Total Consecration to Jesus through Mary which we called in the Philippines TOTUS TUUS JOURNEY for the glory of GOD ALONE!