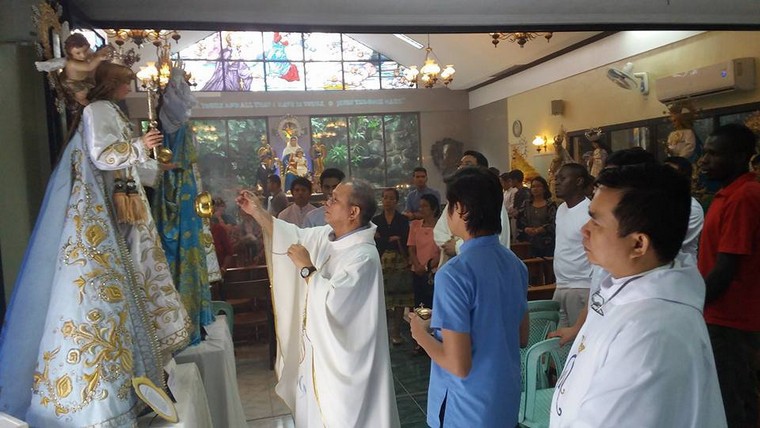 The Annual Marian Exhibit was launched last October 21, 2017 led by Fr. Nelson Cabanero SMM, through prayers and hymns on the opening rites of the two-week display from October 12, 2017 to November 4, 2017. Fr. Nelson warmly welcomed friends and guests who came to witness the unveiling, which was held at the Montfort Center of Spirituality (MSC), spearheaded by Fr. Federick B. Yumang, SMM, with the assistance of the seminarians. The concerted effort redounded to a perfect showcase of the life of our Blessed Mother, her titles and privileges, in the images that were beautifully arrayed. Mrs. Caridad C. Resurrecion, a TTJer, cut the ceremonial ribbon, and the guests entered the MCS chapel to experience the unveiling of a panorama that featured unique images of our Blessed Mother. After the Mass, the exhibit was graced with the presence of Rev. Fr. Richard Magararu, Superior of the Philippine Delegation, who venerated each image as the Ave Maria was sung.
As part of the activity of Marian exhibit, a Living Rosary, participated by seminarians and youth mostly from the University of Makati, was held at the open grounds of MSC last October 28, 2017. Candles were lighted to form beads of a grand rosary lighting up the evening while Hail Marys were lifted up to the heavens. The youth would not be ignored, for a feast of a boodle fight, the Filipino way of eating, awaited them after the Living Rosary.
On November 4, groups gathered to see the exhibit for the last time and to witness the Himig Para kay Maria. The atmosphere was both solemn and rejoicing as a crowd of some 150 gathered to crown the Queen of all Hearts. The rain poured earlier but ceased in time for the outdoor celebration. As the exhibit drew to a close, it ushered the tenderness of our Mother, Maria na ating sinisinta, to a next step of knowing her a little more than we had known her. Fr. Fed expressed himself in elegant Filipino that set the evening’s brilliant glory with his introduction. After his welcome address, the collegians rendered the opening song ‘Emmanuel’. This was followed by Inay by the choir of Sta. Teresita Parish (STP), who provided a fitting choral tribute to our Lady. Under the tutelage of musical director Mark Carabaña, the ensemble successfully honoured the Blessed Mother with their rendition of Marian songs as she was crowned: ‘Stella Maris’ for Crown of Holiness; Maria, Bukang-Liwayway for Crown of Power; and Awit ng Sto. Rosario for Crown of Gentleness. After a brief silence, white roses were offered by the congregation as a sign of a sweet devotion to her. The STP choir appropriately accompanied the floral offering with the epic hymn Our Lady of Fatima. Finally, the original composition of Bro. Armel Collantes, SMM entitled “Mary, Queen of All Hearts”, was sung effortlessly by STP choir member and Legionary Sis Jackielou Foster. The song is the official hymn of the Association of Mary Queen of All Hearts in the Philippines. It was one of the thirteen official entries to the 32nd Original Marian Song Festival of the World Apostolate of Fatima in Cebu, which was a tribute to the Blessed Virgin Mary on her birthday.
For the love of singing and of course, Mary, Fr. Richard Magararu, SMM, Superior of the Philippine Delegation and STP Parish Priest joined the chorale throughout the songs. He also gave the final remarks and thanked the people who made the exhibit a successful one. Dinner was served and everyone parted with full stomachs and fuller hearts. Just when the night ended, the rains came again. Blessings!