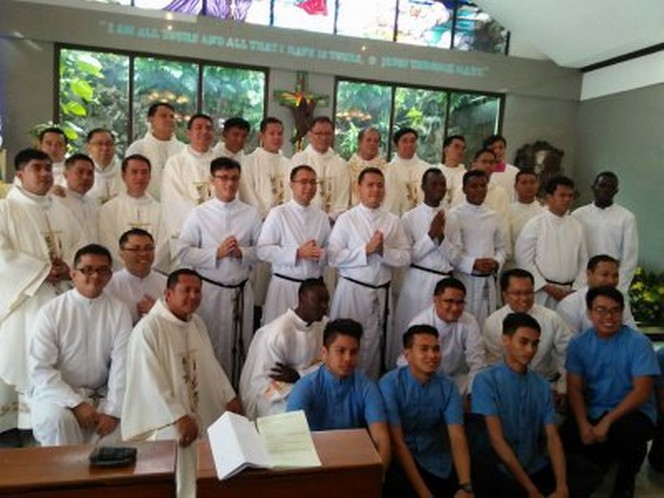 The Philippine and African-Anglophone delegations of the Company of Mary celebrated the first religious profession of the five brothers: Harold Montoya, Jayson Estacion, Horrice Mkandawire, John-Michael Uy and Montfort Funsamtima. The ceremony was held at the Montfort Missionaries Center of Spirituality in South Triangle, Quezon City with the celebration of the Holy Mass which begun at 10 AM. It was presided by Reverend Father Richard Magararu SMM, the superior delegate of the Philippines.
During the reading of the backgrounds of the five brothers, it was very enriching to note that, all of them were fruits of the missions of the Montfortians. Brother Harold who comes from St. Louis Marie de Montfort Parish in Pangasinan, Philippines, has his vocational roots from his parish. In the same way, Brother Montfort also comes from St. Montfort Parish, a well-known historical parish of the Montfortians in Malawi which is now under the diocese. Brother Jayson comes from Sta. Teresita Parish in Makati City, the first Montfortian parish in the Philippines. Brother John Michael comes from Minglanilla, one of the mission areas in Cebu, Philippines. Brother Horrice discovered his vocation in a Montfortian parish in Balaka-Malawi. Indeed, where there is a seed sown for the mission, there will always be significant fruits.
After the profession of the three evangelical vows, Father Richard Magararu handed over the Constitution of the Company of Mary to the newly professed to take it as part of their lives. Giving to each one, he highlighted the need to take the Constitution as their guide always. Subsequently, as Montfort had wanted himself and his followers to see Wisdom in the cross, during the rite of giving the rosaries, the superior delegate accented on the need to meditate upon the mysteries of the rosary so as to know more about Mary, to see the wisdom found in the cross and to integrate them in their daily lives. In his homily, Fr. Richard stressed on the need for the brothers to look at the cross like Mary and to take their vows with full responsibility. “It is very important for you my dear friends to be brothers to all and never to be cocooned to one individual or a particular group of people” he spoke lengthily on the vow of celibacy. If not well understood, it would detriment your missionary spirit which you have cultivated during your one year journey in the novitiate, he added. On the vow of poverty, he underscored that the vow does not align itself to destitution, rather it hints on the need for simplicity of life and embracing the only treasure who is Christ worthy of being possessed. The superior delegate also emphasized on Obedience which requires to surrender one’s will to those above the order so as to favour the smooth flow of mission work. My dear brothers obey, the superior pleaded with a face of joy.
Representing the newly professed, in their message of appreciation, brother Montfort and Harold expressed their gratitude to their Novice Master, Fr. Paul Arnel Lucero, SMM for being an understanding, fatherly, firm and a man with full conviction in imparting to them the Montfortian spirituality and way of life. The two representatives also mentioned how patient their formator has been during the process with many surprising gestures of gentleness in times of the ups and downs of their journey. On the two brothers from the African-Anglophone delegation, brother Montfort thanked the entire Philippine delegation for being welcoming, very friendly to them and teaching them essential elements on how to live in the Philippine culture.
In the same celebration, four Filipino Scholastics also renewed their religious vows, namely: Brothers Ronald Baruela, Armel Collantes, Samuel Gonzales and Lester Bonete.
The joyful celebration ended at around 12:30 PM. Afterwards, the newly professed with their parents and the whole group had lunch together. It was indeed a colourful and meaningful celebration and we really thank God for His enduring love.