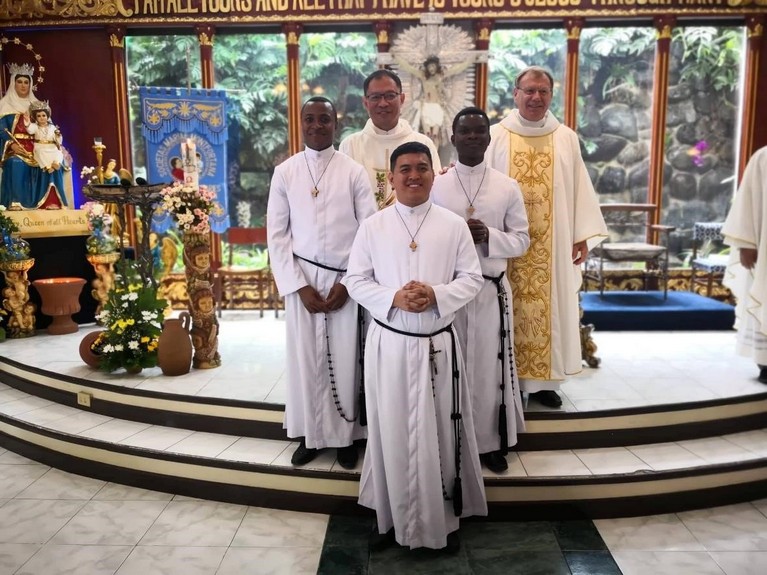 QUEZON CITY, Philippines - Last August 1, 2019 at 10 o’clock in the morning, the Philippine Delegation of the Congregation of the Company of Mary welcomed three new members, namely Bro. Alex Muhwezi, SMM from Uganda, Bro. Christopher S. Mejia, SMM from the Philippines and Bro. Amosi Hope Makina, SMM from Malawi who made their First Religious Profession.
The three brothers have successfully undergone their Montfortian Month from June 27 to July 29, 2019, wherein they spent the first three weeks at the International Novitiate House in Quezon City and the last phase was culminated in the Canossa House of Spirituality in Tagaytay City. They came to know deeper about the spirituality of Father de Montfort through their sessions and spiritual activities that prepared them for the said event.
The Eucharistic Celebration was presided by the Superior General, Rev. Fr. Luiz Augusto Stefani, SMM, who accepted the profession of the three brothers. In the homily of Fr. Norwyn Baydo, SMM, Delegation Superior of the Philippines, he reminded those who will profess that everything in this world is founded on the love of God. He further added that the vows that they will profess are rooted from that love. He then asked everyone present to support these brothers who will profess for the first time and include them in their prayers and asked also to pray for more vocations for the Holy Mother Church.
Part of this celebration was the renewal of the religious vows of nine SMM Scholastics, namely Bros. Francois Leonard Ancheta, Ronald Baruela, Armel Collantes, Samuel Gonzales, Lester Bonete, Harold Montoya, John Michael Uy, Jumamildar Sawitan, and Lord Anselm Glenn Bongcas. Representatives from
different communities, other Religious Congregations, and lay faithful attended the said event with great joy and thanksgiving for this gift of the Lord to the congregation and the Church as a whole. After the Holy Mass, a simple lunch was served for those who joined the celebration.