Entrance to the Novitiate 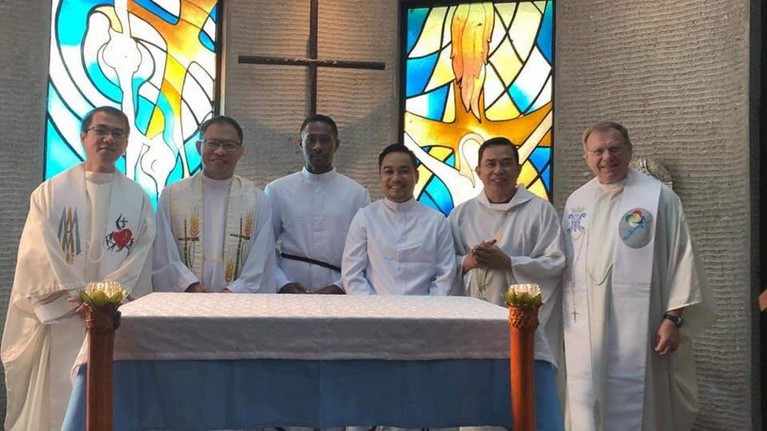 QUEZON CITY, Philippines - On the 26th of July, the Novices for 2019-2020, namely Bro. Oliver Abasolo from the United Kingdom and Bro. Michael Hilton Kava from Papua New Guinea were welcomed into the International Novitiate House in Quezon City by Rev. Fr. Paul Arnel Lucero, SMM, following the retreat on July 24-26 at the Canossa Spiritual House in Tagaytay City.
The two Novices felt so privileged to enter the Novitiate this year under the care of Fr. Paul. They were officially invested with cassocks and cords on the 31st of July in the presence of Rev. Fr. Luiz Augusto Stefani, SMM, the Superior General of the Company of Mary. During the celebration, Father General encouraged the new Novices to persevere in their vocation and to be freely open in the formation process. They were also given the Holy Bible and the book entitled God A lone (a collection of the writings of Father de Montfort) to inspire them to meditate on the Word of God and the charism of their Holy Founder - St. Louis-Marie de Montfort. The investiture which was incorporated in the morning prayer was simple, yet it was a meaningful experience in their lives.   Both are very grateful to the Lord for His love and protection all throughout their journey especially for this significant moment, ending their Postulancy program in Cebu and now entering to their next stage of formation which is the Novitiate program. They would like also to extend their sincere gratitude to the people who have helped and formed them along their journey especially their formators, Rev. Fr. Rene Bustillo, SMM and Rev. Fr. Benjie Notarte, SMM and to the Montfort Missionaries throughout the Philippines, United Kingdom and Papua New Guinea for their love and support.