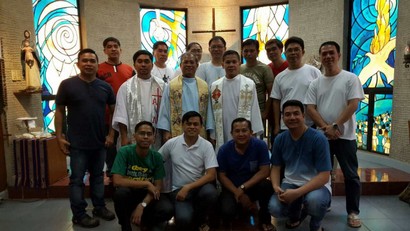 The Montfort Missionaries in the Philippines held their Delegation General Assembly on February 1 to 2, 2017 at New Manila, Quezon City. It was attended by perpetually professed members while the temporary professed members and the novices were asked to be present on the first day. The assembly was presided by the delegation superior, Fr. Richard J. Magararu. The purpose of the assembly wasto discuss matters concerning the “Lineamenta”, the document provided by the Generalate as a preparation for the upcoming SMM General Chapter in May 2017. The assembly started with a Eucharistic celebration which was presided by the recently ordained confrere, Fr. Gener Pito, at the chapel of the Delegation House. They then gathered at the Montfort Center for the next activity, the revisiting of the delegation’s Vision-Mission-Goal (VMG) to recall how the local delegation acted on it for the past five (5) years. The assembly was divided into three groups, namely: the five-year perpetually professed, six-years and up, and the scholastics and the novices. The fruits of the sharing in each group were reported in the assembly. The significant events were recalled and discussed afterwards.
The second day of the event was allotted for proposals on how to bring into reality the Vision-Mission-Goal of the delegation, in line with St. Louis Marie de Montfort’s charism. It was the feast of the Presentation and so the opening prayer was the prayer provided by the Generalate to prepare for the General Chapter 2017. It was a very meaningful prayer. Another group sharing was conducted for individual reflections and responses to the guide questions on the Lineamenta. Discussion followed afterwards. The activity was highlighted with a Eucharistic celebration and a simple yet festive lunch, to celebrate the feast of the Presentation of the Lord. All members of the formation communities were present. The afternoon session was a continuation of the discussion on the Lineamenta and ended with the election of the delegate who will attend the General Chapter with Fr. Richard in Rome. It was Fr. Ting (Santiago) Casing who was chosen and Fr. Rene Bustillo as alternate in case Fr. Ting cannot make it. The assembly was closed with a prayer.