Culminating Activity of the Mayflower Offering at Sta. Teresita Parish 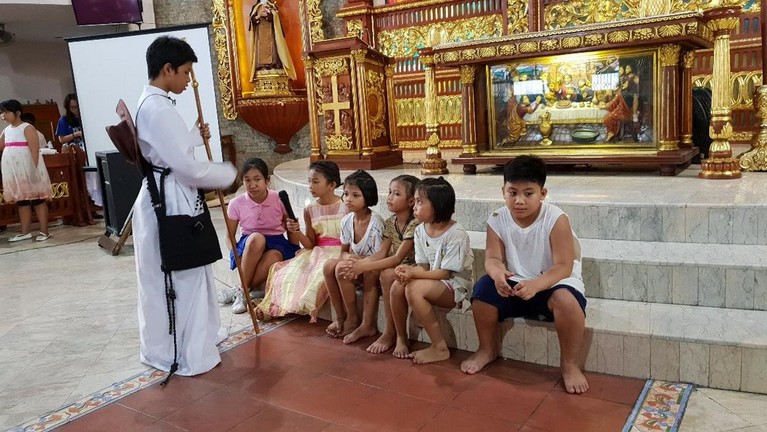 On May 31, 2018, Sta. Teresita Parish concluded the Mayflower offering in a special way. The children of the parish presented drama-musical shows of the life of saints. After daily rehearsal and preparation of props and costumes, the children were so excited for their performance. It was held on the feast of the Visitation at the parish church. The culminating activity began with a mass presided by Fr. Richard Magararu, SMM, the parish priest, and was followed by the flower offering. After the mass, the children were given enough time to prepare for the presentations.  They were very excited and confident as they showcase their talents in acting, singing and dancing. Their parents and some parishioners came to attend the activity. Both the children and the parishioners learned about the life of the saints. The children were able to show their learnings and at the same time gave some entertainment.
The month of May which is dedicated to Mary is very special for the children in the Parish. They would come to the church every day to honor Mary by praying the Rosary and offering flowers to her.  Catechetical instructions are given by the catechists before the Marian prayer. The catechism for this year was focused on the life of some saints who are priests and consecrated.   This was in line with the pastoral theme of the Philippine Church as it celebrates the year of the Clergy and Consecrated Persons. There were five saints who were introduced to the children namely; St. Nicolas de Tolentino, St. Francis of Assisi, St. Louis Marie de Montfort, St. Theresa of Calcutta and St. Therese of the Child Jesus.
The catechists narrated to them the life story of the saints being mentioned.  Their task is to prepare a drama-musical presentation. The children were grouped into five and the five saints were assigned to each group.  They were coached by the catechists and legionaries of Mary who prepared the script and has chosen appropriate songs. The catechists deserve an appreciation for their efforts likewise all the ministries and organizations of the parish because the daily snacks and flowers were sponsored by them. This proved once more that the parish community of Sta. Teresita is very much alive.
- Fr. Richard Magararu, SMM