A Pilgrimage with Mary 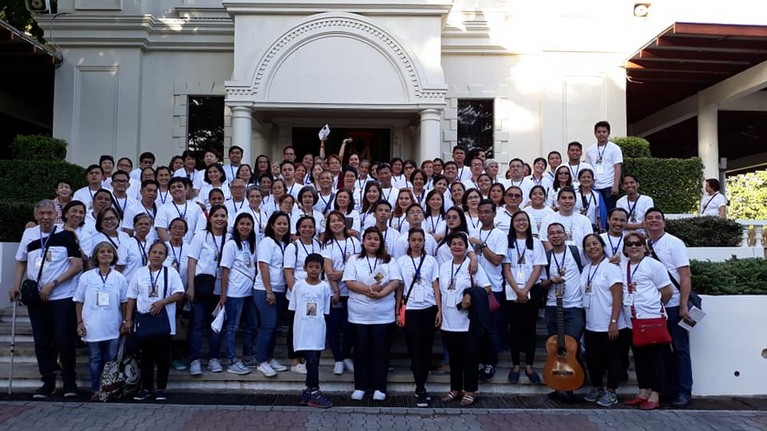 NUEVA ECIJA-TARLAC, Philippines - The Congregation of the Company of Mary in the Philippines had its 28th Montfortian Pilgrimage in the Dioceses of San Jose in Nueva Ecija and Tarlac on November 10, 2018. This pilgrimage was initiated and organized by the members of the Association of Mary, Queen of All Hearts. The participants assembled in two groups, one in Sta. Teresita Parish in Makati City and the other was at the Montfort Center of Spirituality in Timog, Quezon City. The pilgrims took their respective buses and started the pilgrimage.   After hours of travel, the group had its first stop at the Immaculate Conception Parish, the Sanctuary of the Holy Face of Jesus in Nimpacuan, Nueva Ecija. The celebration of the Holy Mass was celebrated at the sanctuary. The Eucharistic celebration was presided by the parish priest together with other Montfortian priests. In his homily, he explained the history of the Holy Face of Jesus and how it was enshrined in their place at Nimpacuan. After the Mass, the pilgrims had the chance to give reverence to the Holy Face. The pilgrims visited other churches like San Roque Parish in Cuyapo, Nueva Ecija; the Shrine of St. Therese of the Child Jesus in Ramos, Tarlac; the Shrine of St. Faustina of the Divine Mercy in Paniqui, Tarlac, the only Shrine dedicated to St. Faustina Kowalska in Asia. The second to the last church visited was the Shrine of St. Josemaria Escriva in Gerona, Tarlac, the only Shrine dedicated to him in the whole of Asia. The parish priest of the shrine who welcomed the pilgrims said that St. Josemaria Escriva, the founder of the “Opus Dei” really directed the people into the path to holiness and inspired them to build the church. The pilgrimage culminated with the visit at the Monasterio de Tarlac in Lubigan, Tarlac. In this monastery, the Relic of the Holy Cross of Jesus can be found and religiously venerated by the people. According to the custom of the fathers there, the veneration takes place twice a year, i.e. on January 19, the day when the cross was enshrined and on September 14, the foundation of the Servants of the Risen Christ Fathers. However, they decided to open it for veneration when groups of pilgrims come to visit their monastery.  Indeed, God is a God of mysteries. The Pilgrimage began with the visit to the Sanctuary of the Holy Face of Jesus and concluded with the visit to the Church of the Cross of Jesus. Both signify the unending love of God for all the people who seek him.
- Bro. Christopher Mejia, nSMM
Novice