A Night with St. Louis-Marie de Montfort: A Dinner for a Cause - SMM Newsupdates - SMM Philippines

A Night with St. Louis-Marie de Montfort: A Dinner for a Cause 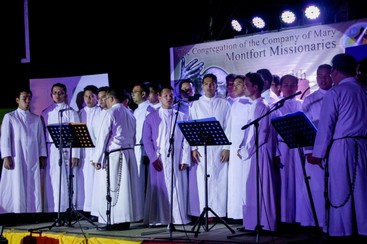 The SMM Philippine Delegation celebrated the commemoration of the birth of our holy founder, St. Louis-Marie de Montfort through a very special event called: “A Night with St. Louis-Marie de Montfort, A Dinner for a Cause”. It was also in line with the Tercentenary Celebration of the Death of Montfort that we are going to close in April this year in Cebu.
The event was held on January 31, 2017 at the Montfort Center of Spirituality, in Quezon City. It was attended by our benefactors, friends, some family members, parishioners from our Montfort parishes and communities and other visitors. It was organized to raise funds for the SMM Philippine Delegation in support to the formation of our seminarians and for the Montfortian Mission.
We started at 6:30 in the evening with an invocation and production number performed by our seminarians and priests. Rev. Fr. Federick B. Yumang, SMM, director of Montfort Spirituality Center and delegation bursar, gave the welcome address. It was then followed by the dinner while the seminarians and priests gave their best song and dance performances showcasing their God-given gifts to all the people present. The priests in their Montfortian cassock helped in serving drinks and desserts to the visitors.
The event was truly a success. It was a night of fun, good food, pleasant music and dance. Rev. Fr. Richard J. Magararu, SMM, the delegation superior, gave the closing message, thanking for all the support everyone has given to make the event fruitful. It was followed by the singing of the Marian Hymn “Salve Regina” as the closing prayer, glorifying the Lord for all the blessings. The event was concluded by the song “Salamat” were all priests and seminarians sang and danced which left everybody in high spirits, bringing with them the joy in their hearts to their respective homes. Glory to God in Mary! Glory to God Alone!