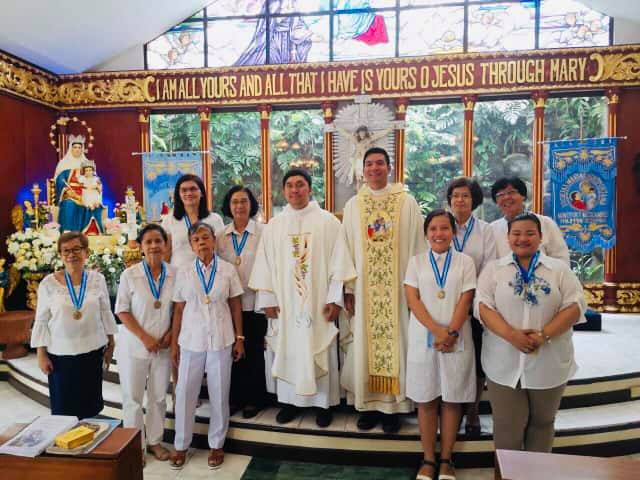 QUEZON CITY - On September 7, 2019, Saturday, the Montfort Center of Spirituality together with the Association of Mary Queen of All Hearts celebrate the Feast of the Nativity of the Blessed Virgin Mary with the enrollment of the nine lay faithful to the AMQAH at the Chapel of Mary Queen of All Hearts, #47, Scout Madriñan, South Triangle, Quezon City. It was attended by the AMQAH members, TTJ members, SMM Scholastics, Collegians, and some friends.
The celebration started with the praying of the Little Crown of the Blessed Virgin Mary at 8:30 in the morning which was led by the pioneering AMQAH members. Towards the end of the Little Crown, everyone offered a flower to Our Lady and whispered personal prayers. It was then followed by the Holy Eucharist, which was presided by Rev. Fr. Federick B. Yumang, SMM, the National Director of the Association of Mary Queen of All Hearts-Philippines, with Rev. Fr. Benjie A. Notarte, SMM, Master of Scholastics, as concelebrant. The enrollment rite of the nine lay faithful took place after the homily. As they were moved with deeper commitment and love like Mary, with conviction they said: “Lord, you have called me, here I am”, submitting themselves freely as official members of the Association of Mary Queen of All Hearts in the Philippines. Signifying their official membership as Associates of the Montfort Missionaries (AMM), they were given the medal of Mary Queen of All Hearts and the book True Devotion to Mary written by St. Louis-Marie de Montfort.
After the Holy Eucharist, everyone gathered at the table for the lunch which was prepared by the members to be shared for everybody. A short meeting of all the AMQAH members followed.
-Bro. Armel R. Collantes, SMM
SMM Scholastic