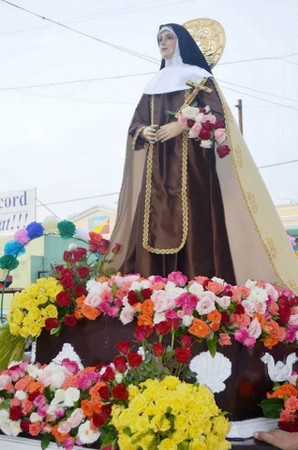 MAKATI CITY, PHILIPPINES - The Church in the Philippines has declared this year 2015 as Year of the Poor. This is part of the nine year novena in preparation for the 500 years anniversary of the Christianization of the country in 2021. It was for this reason that the theme of the parish celebration was: “Parokya ni Sta. Teresita, Halina’t Sama-sama Tayo kay Hesus sa Piling ng mga Maralita.” (Parish of Sta. Teresita, Let us come together to Jesus in the presence of the Poor.) The Novena started on September 25 and ended on October 3, 2015. Devotees filled the church for nine consecutive days with a firm belief that special graces can be obtained through the powerful intercession of the saint. It was led by Rev. Fr. Richard Magararu, SMM, the Parish Priest, and the members of the Apostleship of Prayer Ministry. SMM priests from different communities have taken turns in presiding the daily Masses, with Fr. Richard Magararu, SMM and Fr. Angelo Pusikit, SMM concelebrating. They were assisted by the deacon, Rev. Arnel Pagaduan, SMM. As agreed during the Parish Pastoral Council Meeting the intention for each Novena-Mass will be for different sectors of the parish experiencing various forms of poverty. Representatives from the different sectors were invited such as: a) single parents, widows/widowers; b) the sick and persons with disabilities; c) the jobless; d) the below minimum wage earners, e) the out-of-school youths; f) the families of detainees; g) the families of overseas Filipino workers; h) the vendors; and i) the domestic helpers. Representatives of each sector gave their testimonies after the Homily. They shared about their day to day life situations and hardships, and how they survived through their firm belief that God hears the cry of the poor and helps those who pray unceasingly. One of the highlights of the festivities was the procession held after the last day of the Novena. This year the procession was held at four o’clock in the afternoon. Since it was still bright, the people can clearly see the different contingents honoring our patron saint with dances. It is called “Caracol.” It was more festive and livelier this year because the participants from different religious organizations wore colourful and attractive Filipino attires according to their assigned dance group. They danced along the streets to the music of vibrant Filipino songs played by the Brass Band. It was a joyful event and was well received by the participants and the parishioners as well. After the procession, a Mass was celebrated by Fr. Norwyn Baydo, SMM. On the feast day, the following day, October 4, 2015, a concelebrated Mass was presided by Most Rev. Broderick S. Pabillo, D.D., Auxiliary Bishop of Manila together with Rev. Fr. Richard Magararu, SMM, Rev. Fr. Angelo Pusikit, SMM, and the priests from the different SMM communities. His homily was so meaningful and touching. It was centered on marriage and family life. He talked about the parents of St. Therese who will be canonized as saints on October 18, 2015. Their examples are inspirations for couples who are facing challenges in keeping harmony in their families. Right after the Fiesta Mass, a Family Day was held at the Barangay Covered Court facilitated by the Couples for Christ. The different religious organizations prepared some common Filipino games. It was a fun filled event especially to the winners who went home with their prizes. HAPPY FEAST DAY SAINT THERESE…VIVA SANTA TERESITA!!!!
-Linda Igna